It sounded like it was coming down pretty hard so we went and opened the front door to see .
Lo and behold there stood a pretty good size box , recently delivered. I quickly stepped outside to get it before it got soaked. As soon as I saw the return address, I kind of knew what I had gotten for my anniversary. Nicole told me to open it, but I told her at least not until her dad got home since he was due within the hour.


As soon as he got home I told him I received a box and told him the return address. I also convinced him that if in fact it was my anniversary gift from him, it would be downright cruel to make me wait until Sunday to open it. I mean, I would be home all day, alone with that box whispering ' Marcy, come open me... you know you want to....'.

I wouldn't be able to stand it. So he agreed to let me open it as long as I gave him his present too, which I did and he loved. I got him the book ' The Gospel According to Harry Potter - The Spiritual Journey of the World's Greatest Seeker', which he has wanted for awhile.

Here is the picture of my beautiful basket: 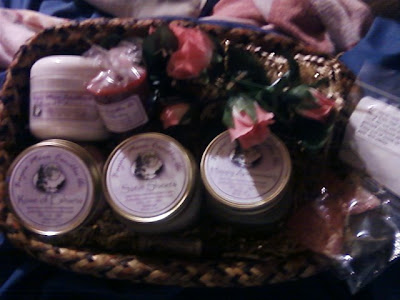 The basket included 3 jar candles and one votive, one beeswax lipbalm and rose scented body lotion. The really cool thing is that the lady who he got it from is one of our in-game friends from EverquestII.

Her name is Connie Dubois and she runs Bayoumoon Candles. Yes, she is based in Louisiana, hence the reference to the Bayou. Her main thing is the candles, but she does the lotions and lipbalm, as well as soap on the side.

I can tell you the candles smell amazing. In the basket , on one of the jar candles the lid says Happy Anniversary! and I can't say it has just one smell, but i can detect a hint of baby powder and is perfect for an everyday , around the house candle. The other scent, Satin Sheets, to me smells very sultry and belongs in a candle -lit bedroom , and me thinks it would go great with the massage oil that I received from my BFF Nikki. The third candle , along with the lotion is called Rose of Esharia. ( Esharia is my characater name in game... which I thought was pretty cool, it was Chris' idea.) The fourth candle is a mini votive of mixed berry scent. The lipbalm smells like honey and the mini airfreshener is called Twigs -N- Berries, and smells Heavenly. Here is what the Candles look like outside of the basket: 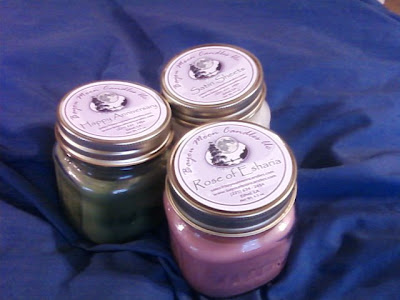 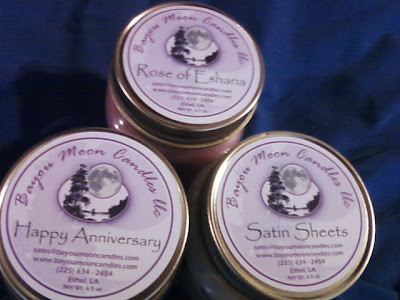 Aren't they pretty? I can tell you that as I sit here and compose this post , I lit the Rose of Esharia candle and it is a very light scent and is not at all overpowering. LOVE IT!!!!

So please go check out out CONNIE'S website, as I can atest first hand she does AMAZING WORK!!!!

Tune in tomorrow when I will do an anniversary post. I know our anniversary isn't till Sunday, but I have a surprise for someone as my weekend post... and you just have to wait and see:))

Have a great day!

How wonderful! What cool candles too. Your hubby is so thoughtful and Happy pre-anniversary.

Happy Pre-Anny! That was a very thoughtful anny present...Mine is in December...I don't have a clue what to get my husband since HE HAS EVERYTHING!?

Books are great, except Mine only reads when he's on the TOLIET!hahaha!

Oh no, you aren't going to do something that has something to do with something else that occured on the same day of your anniversary, are you? I'm probably just being paranoid, so HAPPY EARLY ANNIVERSARY! (And hope you put that massage oil to good use!)

Awww how sweet! We've never been good at getting gifts for each other. I'm more of a "I want it now" kinda girl!

Oh what fun for you! And umm I must admit that it's a good thing you aren't married to me (for a number of reasons, of course!) because I would have taken that box with me to work and you would have seen neither hide nor hair of it until at LEAST Sunday :) But I'm mean like that! Happy early anniversary!

Happy Anniversary! I happen to be the author of "The Gospel according to Harry Potter" and got a Google Alert to the mention of it. I hope your husband enjoys it. I thoroughly enjoyed discovering the Bible / Harry Potter connections and sharing them.

Blessings on your marriage.