I've posted several pictures of my dogs, but hardly ever any of my little gray cockatiel Judy. So here she is while she was eating her breakfast yesterday morning. Isn't she a cutie? 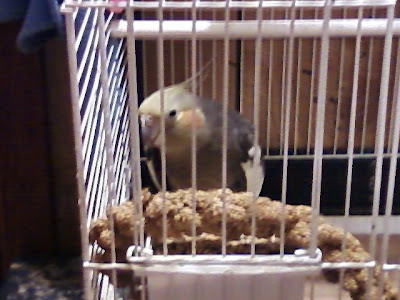 She loves me, likes Nicole and tolerates Chris.

She loves to eat. Besides her birdseed/millet mixture, she get bananas and grapes. She will occasionally eat apple.

She loves crunchy cereal, such as honey nut cheerios and corn chex.

Usually she is a very mild mannered bird - except when I try to take a nap. I do not nap often, but on the occasion when I do, that is when she decides to raise heck and will screech to the top of her little bird brain , therefore making my nap null and void.

She loves to fly around my bedroom. Very rarely does she hit the mirror, window or fan.

She loves music. I usually leave Country Music Television on for her. This comes from the people who I originally got her from. Jenny and her husband Tom raised cockatiels and when they would get too noisy, Tom would sing to them softly as he played his guitar.

If she hears a siren, whether it is from a car, fire engine or police car, even a doorbell on TV - she will answer it. As loudly as she can.

If she decides she doesn't like you she will hiss at you.

Hope ya'll enjoyed Judy. She really is a sweet little birdy and fun to watch. Will try to get more pics of her. Maybe I can get one with her wings spread, as she has beautiful wings.

Each post I write is getting me closer to our contest. Please keep chekcing back in, it should be sometime next week I hope!

she is a pretty birdy! I hope you do get a pic of her flying!
Happy Friday!
Laura

She is so sweet! I like corn chex too! He-he.