Well, so far my Monday has gone WAY better than my past Friday:) Chris had a bit of a rough weekend, but this morning is doing ok for the most part. He got to the bus stop this morning without any psycho driver running a stop sign, so all was well in my mind. At least Chris called me to tell me he was ok, knowing I was at home freaking out:)


I have decided to join the first ever Crochet Along on the Lion Brand Yarn website. It is an intermediate level patter. The third block looked to me to be the one that would cause me the most trouble so I decided to practice. I got the stitch down ( I think), but it's supposed to go in a STRAIGHT LINE, not be curved. Maybe I need to not do such tight stitches?

This was my try: 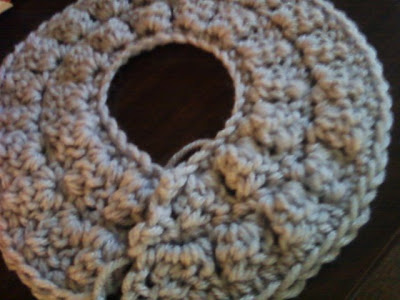 Chris said it turned out pretty, but he too diden't believe it was supposed to be circled...

I was supposed to be trying a Cluster stitch... if any of you out there can crochet, and can possibly help me, give me some insight as to why it turned out circular, and tell me how to get it to go straight I would greatly appreciate it.

In other news, I've seen two commercials lately that have caused me to wonder about the minds of boys and men in general:


Isn't it just like a man and little boy in general to just stand there and watch a spill spreading , trying to figure out how many paper towels it will take to clean it up - instead of just grabbing some and cleaning it up??/sigh

And the other one that is driving me crazy, and I'm sure has given little boys the world over an idea is the one where you see the little boy carrying his potty seat into the living room , putting it on the couch. You see him take off his diaper and climb on the couch.

Hilarious commercial, but I want to see how many parents have had to deal with this happening since their child saw it on TV?

I tried to find it on youtube, but its not on there yet.

Hope everyone had a great weekend!

There is still time to enter this contest at Semblance of Sanityto win a fabulous book! All you have to do is share a bit of growing up advice that your mom gave you. The book is great for mothers and daughters!

You are sp talented, it's something I just don't know how to do.

And, mabunny, I like the bunny picture. And, I sure hope Chris is feeling better. Maybe the crocheted thing could go around the broken shoulder? Just a thought. (not sayin' it's a good one... just a thought;))

Oh my! I just got caught up here. I am glad Chris is okay. Just over four years ago my husband called me because he got a call from the doctor saying a mole of his came back melanoma. They wanted him to come in right then and get it removed because they had an opening. My husband was just moaning and groaning about the pain later that night and I thought he was being such a baby. It was just a mole, you know. Well, the next day when I changed his bandage for him I was mortified. I felt so bad... they had taken alot of the surrounding tissue and his scar was 6" long and very swollen.

wow I had a lot of catching up to do. Glad your husband is ok. This commerical would be funny i it wasn't so stinkin true.