Humble Pie, and a Broken Hubby

You know its hard to admit you were wrong. It is for me sometimes. I'm human, and I don't pretend to be more than that. I yell, I cry, and sometimes I swear. I also live, laugh and love.


The humble pie I dished up lastnight did not sit well with the chili dogs I made for dinner.


It all started yesterday morning. I was having to sub yesterday. My first real day , not just in an art class but a class of kindergarteners. I had to guide them through their whole day, not just tell them to sit and draw. I was a bit nervous. Nicole was dragging her feet a bit. I was running around like a mad woman. We had plenty of time, but it FELT like we didn't. Chris left for work on time, taking off on his bike to get to the bus stop.


About 20 mins later my cell rings, its Chris' ring, but I didn't get to it in time. I tried to call him back. No dice. So I tried again and got his voicemail. I thought whatever, if he needs me he will call me back. Sure enough about 5 mins later ( maybe less) he calls again, telling me to come open the front door, he was hurt and needed help getting inside.


So I go open up for him, and hes holding his arm against his chest. I truly didn't believe he was hurting that bad. I thought he was more shaken up then anything since what happened was he saw a car barreling down on him, oblivious to the upcoming stop sign. Chris swerved so as not to get hit, hit some gravel, therefor throwing him into the curb and off the bike he fell landing on his shoulder.

I was trying to get lunches together for nicole and I , make our breakfast, feed the dogs, and whatever. So Chris got his own ice and stuff. I guess like I said I didn't think he was hurt that bad, but maybe should have fussed over him a bit more than I did. We got into a little bit of a tiff. Admittedly I guess I was in a bit of a snit to begin with and that just fueled the flames.

Needless to say he stayed home from work and went to the doctor. I went to work, and Nicole went to school. The day was ok I guess, till I realized about lunchtime the reason for my snit.

You know. Every single woman at one time or another has been hormonally influenced, for good or bad.

After work, I rode home with my friend Nan, she had to pick her son up so we just all piled into the car. Chris called me and told me he just got the x ray results and he has a broken collarbone.


So we get home, his arm is in a sling for the next three weeks, then back for more xrays.

After finding out that he was hurt that bad and I kind of brushed him off when he came home after it happened, I took my helping of humble pie stuffed with xtra crow...

Like I said it didn't mix well with the chili cheese dogs we had for supper.


After a good nights rest however I am feeling better. He's just sore all over now from the fall in general, not just his shoulder/collarbone.

Here is my broken hubby... 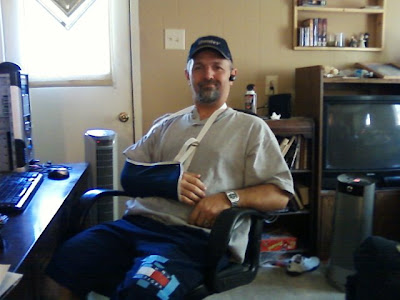 hope you feel better very quickly Chris and heal quickly :) I hate how people drive they do not pay attention... I drive a Black GMC pickup and people are forever pulling out in front of me... I asked martha before if I have invisible paint or something because they act like I am not there!

Ohhhh ouch ouch ouch! It's funny that when you said he was holding his arm to his chest and had fallen on his shoulder, I was thinking man, he's lucky he didn't break his collarbone! But ummm that's only because my mom did the same thing. But not nearly as gracefully, I'm sure. Did the car at least stop to check to see if he was ok? Here's hoping it heals well AND quickly for him. Make sure he does his mobility exercises as SOON as he's cleared for them. Seriously.

No Michelle, the car wasn't going to stop for the stop sign, so what was a man on a bicycle.
Chris told me lastnight though, that he went up over the handle bars and had he not turned to land on his shoulder he would have landed on his head. I'm just thank ful it wasn't worse. I can nurse him thru this , and I'm happy hes still with us.:)

Oh no that's terrible he got hurt and there's nothing worse when you brush something off and it turns out to be serious. I'm sorry for both of you and hope he feels better soon.

Wow i'm sorry he was hurt.Hope the healing goes quickly.

I don't like to admit when I am wrong either.

OUCH! Hope you will be feeling better soon ;)