We went to the local ren fest yesterday. Carson had never been , so her and Nicole decided to dress up. Chris and I did not. 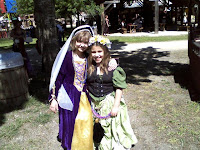 Aren't they cute? Nicole is on left , Carson on the right 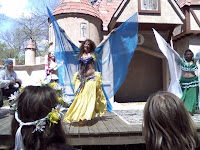 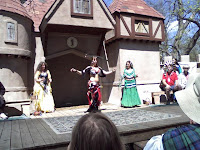 This is from the Bellydancing show. One of my favorites that I go see every year

Click here if you want to learn more about this troupe of fabulous dancers! 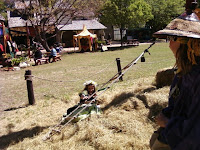 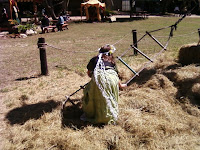 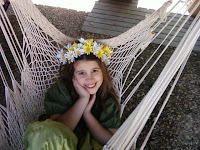 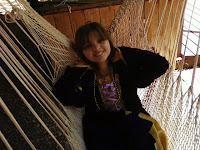 The girls got a little pooped out about halfway through the day and decided to chill out in rope swings. 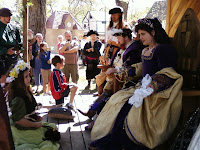 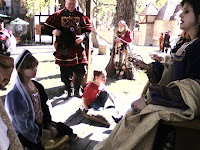 We had an absolute blast. We had some really good food, and saw some good shows.

I know people that aren't real familiar with ren fests think the ones that go are an odd lot. Admittedly some are. Carson's parents wound up going out there too for the first time ever. They had Carsons older brother with them, he is in fifth grade. At one point we met up with them and Yvette remarked to me thatLorenzo had seen more boobs in the few hours they had been out there then the whole time he was being breast fed! It is true that some women could have a serious wardrobe malfunction, or give themselves a black eye if they hit a rough patch in the road, but most don't take it that far.

All in all it was a great day, although I got sunburnt pretty bad on my face and neck but i will survive with aloe and lidocaine:))

The girls were so tired lastnight we had to referee. They didn't seem to realize just how tired they were and kep snipping at each other, but after a good nights sleep they were fine.

Hope ya'll had a great weekend! Don't Forget my contest if you haven't already entered. It is three posts down!!

great pictures, glad you had good weather for the fun in the sun. HUGS Laura

Hey, that looks like so much fun I might have put on a pair of tights and go.

Looks like you had a great time. I have never been to one but they look fun!

I love Ren Faires and the odd lot they attract.

That looks like everyone had lots of fun. They're definitely on the radar when the kids get older, but too much stress right now for them. We'll stick with our Strawberry Festival that has less to do for now!