Chris is finally over the flu and thank goodness mine and Nicoles flu shots are working and we didn't catch it!!!

I was working yesterday so after I collected Nicole and William for the ride home I asked her and she said sure it sounded like fun.
Now note this please - I have only ridden our DART bus/train system ONCE, and that was with Chris. I had never looked at a train/bus schedule or anything.
Chris told me to drive to the station, buy two day tickets, and hop the train going North to the St.Paul station.
Ok sounds simple enough.
We got there, bought the tickets, and missed one train, but caught the next one. We snuggled in to two seats and tried to figure out how many stops we had before we had to call Chris. He told me once we got to Union station to let him know .

Well , never having ridden by myself, I was a bit nervous. Thank goodness there was a lady who was obviously train savvy and told me to look above my head and just make note of the stops we were at... yay. Nicole and I read every stop we came to and she counted how many more till we met up with her daddy. It was like a game to her. I felt like an idiot:) It really wasn't that difficult though and Chris met us at the right station, then we hopped the other train to get to Plano. It dropped us off like a block from all the festivities.


When we got off the platform we smelled the most incredible smells, from both restaurants and food vendors. We wound up eating faire type food though - french fries, corn dogs, fried catfish, nachos and lemonade. Healthy huh?

The main thing is we had fun. It was cold enough that we were all bundled up and such, but that didn't matter. There were tons of rosey cheeked kiddos running around.

We also saw some of the most incredible shops. We found a costume shop that had every imaginable costume possible. It was fun to look at all the masks and wigs.

We also added to our healthy dinner by hitting the chocolatier, where we each got one truffle to splurge on. I chose a peanut butter truffle and the chocolate had just a hint of mint - yummy.


Then we found this candle shop. I will have to look at the brochure and put a link up next post as they would make great gifts if you are into candles. The shop I believe was called Tuscan Lights. Just plain Awesome!!!!!


We also found a doll shop that Nicole just had to go into. She wound up getting a small stocking stuffer type Christmas gift , and when we went to pay for it, I found this jolly little lady at the register. I absolutely LOVEd her hat. If you can't tell from the picture it was a boingy Santa hat. Where the cone on top should have been was red sparkly springy wire. Never having seen such a hat I asked her if I could take her picture and she was happy to oblige:) 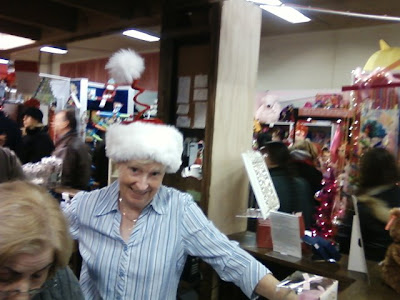 Since I couldn't take a picture of every tree out there that was decorated with lights, I just got one from afar, but I hope you can use our imagination and see and smell the wonderul things we experienced lastnight. 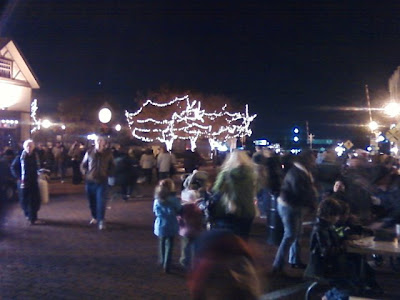 The train ride back home was long but fun, because we were all together. Needless to say we slept in this morning:)

In other news, we found out the other day that Chris' great-aunt Mildred passed away Thursday. She just didn't wake up from her afternoon nap. We knew she had Lymphoma, but all we kept hearing was that she was doing well, but she always sounded so tired. I'm glad she doesn't have to fight it anymore and is at peace and rest. We will miss her. This also means that my MIL will be coming up here again. So needless to say I'm dusting and picking up today.

Sorry to hear about the great aunt.

Your Christmas fair sounds like it was really fun. I called my younger son in to look at the lady with the funny hat and he said, "Brandon would totally wear that hat. In public. When it wasn't even Christmas." This is true. My oldest has a thing about funny hats. Thanks for sharing.

What fun..I wish we had public transportation like that..Our Town is probably like the town you live in, Just a bunch of them...Which is why our area is called the Tri-Cities...but Nothing as big as Dallas..

Fair food is always the best, and oh so Yummy!!!

That sounds like a lot of fun. We unfortunately still miss things like the tree lighting ceremony that was today because of naps (and I actually need to go wake up Little Miss like ... now). Someday though -- and I'm glad you had fun. It sounds like a blast!

I'm so sorry to hear about Chris' great-Aunt. I'm glad she had a peaceful-restful passing.

Your little train ride sounds fantastic. It looks like so much fun. I sure do wish we had something similar around here...I just love that sort of thing. Glad you had a good time and thanks for sharing the pics. Love the hat ;)

Oh the train ride sound like tons of fun! I wish we had some public trasportation around here!

Your outing sounds like a lot of fun. I enjoy riding on trains too... in fact Stew and I are hoping to take Brylee and Griffin on the train next weekend into the city.