A Few Giggles for your Tuesday:))

The first business of the day is to show you my early Mothers Day present.  Since my birthday and Mothers Day usually fall within a few days of each other, if not on the same day, Chris asked me if I wanted  my present early.
I had mentioned that I wanted an MP3 player because I love listening to music while doing housework and such.  Also , it would be nice to be able to listen to something else besides kids running around the school during my breaks or whatever.
So we went looking Saturday and this is what I got: 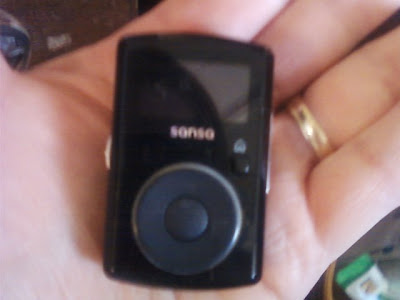 I was surprised how small it is - no bigger than a Chicken nugget:)  It is also  has FM capability, so I've learned how to preset all my fave radio stations.   Since Chris has an IPod, he already has a ton of music on his computer.  He showed me how to put some songs on my new toy, so while he was sleeping in Sunday morning I decided to play around.  I downloaded Windows Media Player on my computer and dug out my CD case.  Then I read and learned how to copy my CDs to WMP and download them to my new musical gadget.  I now have about 50 songs on it - and will search for more today.
_____________
Ok, now for the giggles.  These are some funny e-mails I got from various friends and family that I thought you might enjoy.
Funny #1
Nude Runner
A woman was having a daytime affair while her husband was at work. One  rainy day she was in bed with her boyfriend when, to her horror, she heard her husband's car pull into the driveway. 'Oh my God - Hurry! Grab your clothes and jump out the window. My husband's home early!'
'I can't jump out the window. It's raining out there!'
'If my husband catches us in here, he'll kill us both!' she replied.  He's got a hot temper and a gun, so the rain is the least of your problems!'
So the boyfriend scoots out of bed, grabs his clothes and jumps out the window! As he ran down the street in the pouring rain, he quickly discovered he had run right into the middle of the town's annual marathon, so he started running along beside the others, about 300 of them.
Being naked, with his clothes tucked under his arm, he tried to blend in as best he could. After a little while a small group of runners who had been watching him with some curiosity, jogged closer.
'Do you always run in the nude?' one asked.
'Oh yes!' he replied, gasping in air. 'It feels so wonderfully free!'
Another runner moved a long side. 'Do you always run carrying your clothes with you under your arm?
'Oh , yes' our friend answered breathlessly. 'That way I can get dressed right at the end of the run and get in my car to go home! '
Then a third runner cast his eyes a little lower and asked, 'Do you always wear a condom when you run?'
'Nope.........just when it's raining.
FUNNY #2
Estate Planning
================

Dan was a single guy living at home with his father, and
working in the family business.  Dan found out he was going to
inherit an obscene amount of money when his sickly father died,
so he decided he needed a wife with whom to share his good
fortune.

One evening at an investment meeting, he spotted the most
beautiful woman he had ever seen. Her natural beauty was so
stunning that it took his breath away.

He mustered up all his courage and approached her anyway.

'I may look like a simple and ordinary man to you,' he said to
her, 'but in a very short time my father will die, and I'll
inherit 200 million dollars.'

Women are so much better at estate planning than men.
Final Funny of the Day
No Speak English

A Russian woman married an american gentleman and they lived happily
ever after in America . The poor lady was not very proficient in
English, but did manage to communicate with her husband. The real
problem arose whenever she had to shop for groceries.

One day, she went to the butcher and wanted to buy chicken legs. She
didn't know how to put forward her request, and in desperation, clucked
like a chicken and lifted up her skirt to show her thighs. Her butcher
got the message, and gave her the chicken legs.

Next day she needed to get chicken breasts, again she didn't know how to
say it, and so she clucked like a chicken and unbuttoned her blouse to
show the butcher her breasts. The butcher understood again, and gave her
some chicken breasts.

On the 3rd day, the poor lady needed to buy sausages. Unable to find a
way to communicate this, she brought her husband to the store...

What were you thinking?
Hellooooooo, her husband speaks English!
_________
Now that you've had your giggle for the day, get back to work!
I also hope everyone had a fabulous Easter!
Posted by MaBunny at 9:15 AM

Hey!!! Ask Chris where mine is.. He knows our birthdays are only a couple days apart so shouldn't I get my presents early too?

What a great gift - I love love love my Ipod. I listen to music, and books on it, and it's become practically a part of my ears!

Cute jokes - I needed a laugh - Thanks!

Nice new toy! Have fun with it. Just make sure you don't lose it. I'm afraid of those tiny ones for just that reason!

Lovely wee present~!
Love all the jokes too.