Well, you know the old adage that Mondays always suck, well this one does for sure.
Yesterday Cooper got up but refused to eat or drink anything all day. She was acting a bit disoriented, and she slept 90 percent of the day.
I got her to take a bit of water last night and she pottied twice before we turned in for the night.
She got me up around 2am needing to go out again, then went back to sleep till around 5, when she woke up and threw up. After that she drank a lot of water and we went back to sleep. My alarm went off at 7 so that I could wake Chris up for work. I got up and went the bathroom, wasn't in there long at all, but when I came out Cooper had pooped , and it was almost nothing but blood.
I took her to the vet and after running some tests and doing an exam she determined that Cooper was in critical condition with kidney failure. We had to have her put to sleep.
I miss her terribly. She was my anniversary present 8 years ago. I found some old pics of her and thought I'd post them here as a mini tribute, some you've probably seen before, but just humor me, k??? 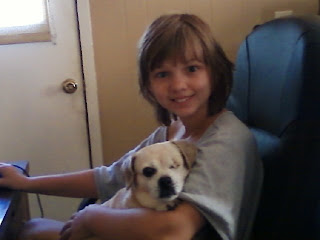 Oh no! I'm soooooo sorry to hear about your dog. I lost my 4 yr old puppy a few months back and it still sucks.

I am so very sorry! This just breaks my heart. I think you'll remember we went through kidney problems with our Lu Lu and had to put her down in June... just 5 days after our son's parrot died. Losing pets is so hard! Just the other day I went into our groomer's to make an appt. for our new dog... I hadn't been in there since the last time I took Lu Lu in. I got all choked up and teary eyed when I told her she was gone. OY!!! I'm getting all emotional writing this. I know well how you are feeling right now and my thoughts and prayers are with you!

P.S. I'm freezing my butt off today... hasn't even hit 30 degrees yet, ugh! and I've got that lapgahn you made around my shoulders. I love it! Because it is my son's school colors I take it with me to games and people always remark on it.

I'm so very sorry, Marcy. I know Cooper was your best friend. Honey, BIG HUGS from Tulsa. And prayers for all of you right now. I'm glad you had Cooper as long as you did. She was a wonderful dog and friend.

Oh, Marcy, I'm so sorry! My thoughts and prayers are with y'all right now and I'll be there real soon to give you a big hug in person. In the mean time ((((HUGS)))) for you, Nicole, Chris and Sue. See you soon!

awww, she was a sweetie. So very sorry to hear that she is no longer with us. May the memories of the happiness she brought you bring a smile to your face today...jj

Oh, I'm so sorry. I know how it is to lose a pet, especially when it's so unexpected. At least it was really quick and she didn't have a long slow decline, small comfort that it may be. *hugs*

I just read on Face crack and had to come see what was here... I am soooooooo sorry Cooper was my squirts twin and I hope they are playing together now... HUGSSSSSSSSSSSS and tissues!

hey marcy... dome a favor..the girl at the other end of this link (Laura) needs to have an eyelid lift... shes a real sweet girl and would like to talk ot someone who has had this done... my mom is not able to talk to her (no computer acess) anyway she is scared to death thinking about this surgery... thanks :) Love n hugs
http://lozsmedicaljourney.blogspot.com/